Microsoft Surface Pro X 2020 Review: Is it Worth It?

Microsoft Surface made a comeback of a better 2019 model, which is expected to resolve the issues in the previous model. Introducing the Microsoft Surface Pro X (2020), the newest flagship tablet added to the Surface line. This popular product has been getting a lot of attention from consumers.

Microsoft announced that performance, battery life, and compatibility have all been enhanced with the upgraded version. We'll see if Microsoft can keep the promises they've given to the public in this review. 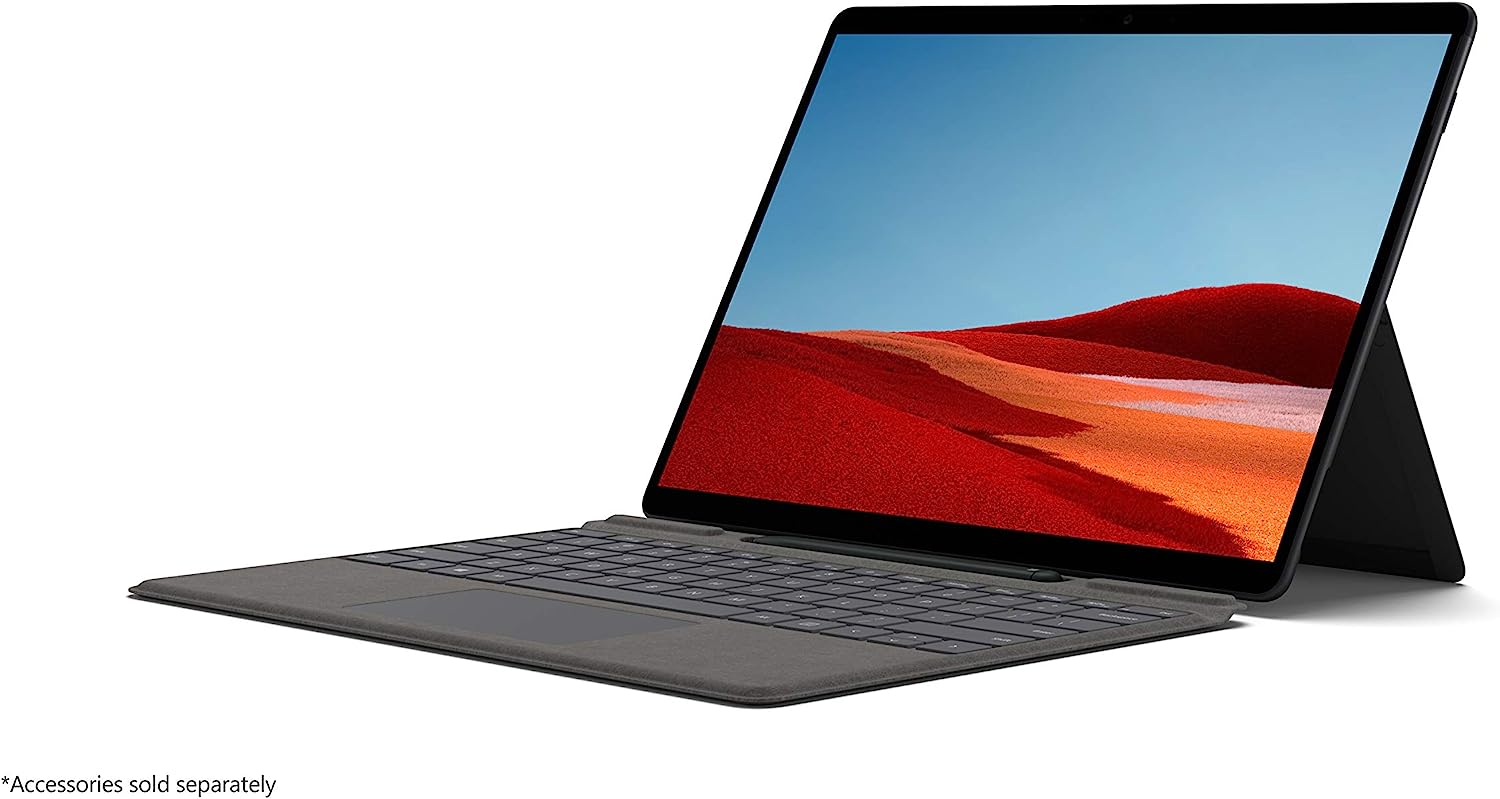 The Microsoft Surface Pro X was released on October 13, 2020. Designed to pull off the features and qualities that the former model couldn't, it’s equipped with the improved SQ chips, the latest version of the ARM processor.

Besides that, the new Surface Pro now comes in platinum finish and multiple signature type cover colors. Unfortunately, the signature keyboard and surface slim pen are still sold separately. However, they are available in a bundle from a Microsoft store at a lower price.

Overall, Microsoft Surface Pro X feels like an iPad Pro but in Windows. There's almost nothing to complain about its new design.

It is also capable of Windows Hello face sign-in, allowing an "instant on" the moment you open it. On the other hand, the rear camera has 10MP with autofocus and can shoot 4K video: ideal for vlogging or tech tutorials.

The "Eye Contact" feature allows you to focus more accurately and quickly on video conversations. By auto-adjusting your eyes, it looks like you are talking directly to a person instead of the screen. This feature is exclusive to any surface laptop.

The Surface Pro X has two USB-C ports. However, they are not Thunderbolt supported, so they are unable to accommodate external displays.

There's also no USB Type-A port, so you need a dongle to connect video game consoles and others. It does have a surface connect port for connecting external monitors, but it lacks the MicroSD card reader and a 3.5mm headphone jack.

That was pretty disappointing as a lot of people still rely on wired headsets instead of Bluetooth. As a result, you need a USB-C audio adapter. It is sold at the Microsoft store, though.

As mentioned previously, Microsoft Surface Pro X 2020 comes with a better CPU and GPU than the original model. Most customers complained about the latter being erratic and sluggish, particularly when returning from standby mode.

It also scores higher than the Samsung Galaxy Book and topples Intel chip by a wide margin. Therefore, Microsoft Surface Pro X can process different applications at once.

Below is the list of applications Microsoft Surface Pro X 2020 can process smoothly:

Service availability and performance subject to your service provider's network or wi-fi connection.

Microsoft's intention for releasing Pro X 2020 is to address last year's Surface book’s drawback, but some app compatibility issues persist. That's because ARM is still incompatible with the x64 bit used by most applications.

We still have to wait until the x64 app emulation support for Windows ARM becomes available. That should solve the majority of the compatibility issues, particularly with Adobe Photoshop.

Anyway, Microsoft announced that it is now in progress. Hopefully, the release date won't be that long as many are on the waiting game.

Overall, it has a brighter, sharper, and larger screen than the older Surface Pro and Surface Pro 7.

There is a compartment under the built-in kickstand that allows you to replace the Nano Sim Card slot. You can use your own sim card from your service provider or Microsoft store.

eSim embedded in some mobile devices is supported. This allows users to access the Internet even without a physical sim card.

Microsoft says that the new Surface Pro X battery life lasts up to 15 hours of typical usage. Upon testing, the battery offers a maximum of 9 hours at reduced screen brightness. That's still a lot better compared to the 8-hour battery life it had before.

Compared to Lenovo Flex 5 with an almost all-day battery, the Microsoft Surface Pro X and other surface devices seem to have shorter battery life. The only thing is that they are fast charging. Within an hour of charging, the battery is almost full.

In the future, we hope that the new surface devices will have longer battery life.

The new surface pro X signature keyboard is backlit with a good travel distance and a magnetic feature that adds a nice touch.

As mentioned, the type cover is already available in Poppy Red, Ice Blue, and Platinum. These colors give you freedom from fingerprints that the matte black models are prone to.

Another favorite feature of many customers is the Pro X surface slim pen. It has a strong magnet that flips the surface pen back to the tray.

So, no need to worry if you forget to recharge it because the tray charges it over wi-fi. Lastly, it works with the other surface pro models.

Unfortunately, the Microsoft Surface Pro X 2020 slim pen is sold separately, costs $144. The good news is, you can purchase it with a type cover at the Microsoft store at a discounted price.

What is Microsoft Surface Pro X 2020 Best For? 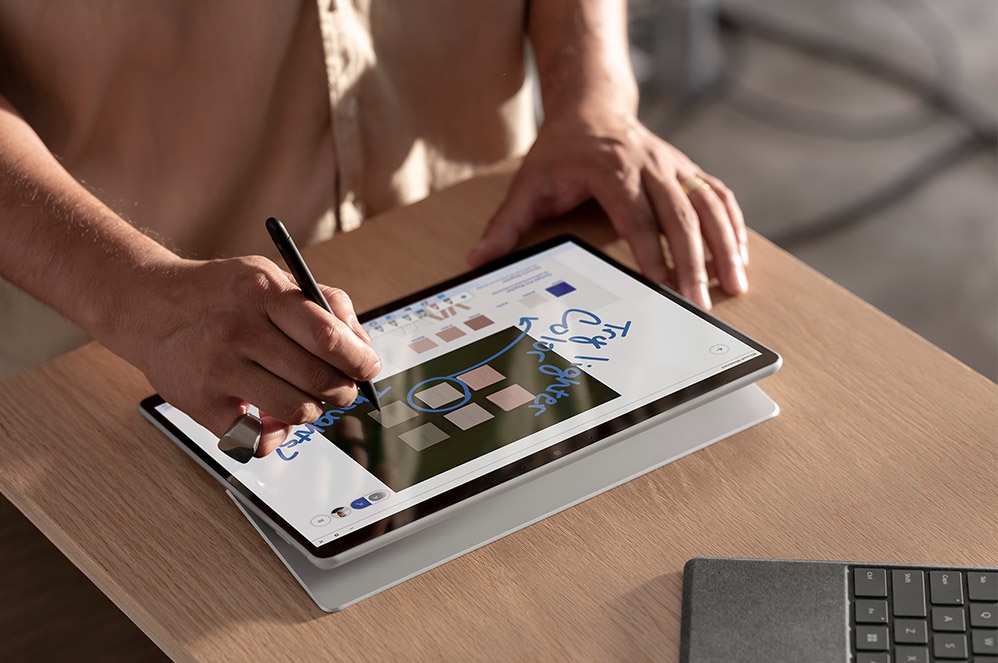 Microsoft said that Surface Pro X was deemed one of the best-selling products after its initial release in October 2020.

Customers like its ultimate performance for productivity-based apps, including remote access, Microsoft Office, cloud storage, and more. Plus, the dual-camera delivers impressive quality videos and conference calls. Not to mention the slim surface pen that allows fast and convenient drawing.

But those who prefer a laptop for gaming, video editing, and installing x64 bit applications might want to consider touch screens with Intel chips. The alternatives include HP Envy x360, Lenovo Yoga C940, or Microsoft Surface Book 3.

As of now, Microsoft is in the process of improving ARM. Once it becomes available in x64 bit, Microsoft Surface Pro X 2020 is expected to be the future of laptops.

We've garnered feedback from other customers over the Internet to see how Microsoft Surface Pro X 2020 is getting on. Here's what they have to say:

"It's pretty expensive, but this is literally everything you need if you just work on docs/OneNote. The touch screen is great. The only issue is the pen won't recognize the bottom corners making it hard to press the windows button without a keyboard. But your fingers work fine.

Battery life is okay. If it weren't for the fast charging, then it wouldn't be worth it, but it stands up to the hype." - Bafar

"It's not a 64-bit machine, so this will be a big issue, can't run Photoshop, it's not worth the money. It will need to come with all the attachments, keyboard, pen, and whatever is required to use with the USB port otherwise, you will be tickled to death for the cost of accessories.

The only attraction is the LTE 4G. Otherwise, it's another RT computer. We will have to wait a year or two for software to ketchup."- Anonymous

"Bought it when it first came out. Works perfectly for my use. I can do my classwork on the go, and I don't have to bring my beast of a Gaming laptop (MSI GT 75 with I9 Rtx 2080).

The main benefit is the ability to use the Internet, but the main con is the ARM software. Personally, if you're not afraid of being a testing subject for the new Windows ARM system, I say go ahead and buy it so we can make ARM more widely used.

I truly believe this will be the future, but if you want something with more support with full Windows 10 experience, go buy the surface 7."- Alain

Microsoft Surface Pro X powered by Windows ARM operating system and SQ2 CPU is not far behind the other Surface laptops and 2 in 1 devices that run on Intel Core. Honestly, it is like the iPad Pro with Windows OS.

We can consider this the best replacement for a desktop that can handle basic computing tasks such as web browsing, MS Word processing, and streaming. But remember that it still has limitations on heavy uses and is still yet to be compatible with x64 bit.

To get updates on our reviews about other future brands, please follow us on Facebook or send us a message.