What is V-Sync: The Pioneer in Dynamic Frame Rates Stabilization

Have you ever wondered what V-Sync is? If so, you're not alone. Video games and computer-aided design (CAD) software have been using this feature for years, and it's time to take a closer look at what it can do for gamers and professionals alike.

This blog post will tackle all you need to know about V-Sync, including its importance and application. We will also discuss how it has helped shape the refined frame rates, incredible resolutions, and lifelike images and scenes that we enjoy today. So, read on to learn more!

Vertical Synchronization (V-Sync) is a feature that synchronizes the display screen refresh rate with the gaming or professional software frame rate. V-Sync prevents video output issues in the past, such as stuttering and tearing. With this technology, modern GPUs can run at greater frame rates with ease.

Video production and computer graphics in the past can be tricky, but one thing that's often overlooked is how vertical synchronization is maintained. For instance, If new images are being transmitted while an old one is still showing, there will be tearing in the midst of a frame.

The visual problems that occur on-screen alongside stuttering and sometimes input lags are the primary reasons why the V-Sync solution was invented. In summary, the V-Sync keeps the frame rates and monitor refresh rates in sync for smoother transitions and better presentation. Is V-Sync worth it?

V-Sync’s primary function is to remove screen tearing by working in sync with the screen display, which provides the right timing for presenting the succeeding frames. Since V-Sync matches the GPU and monitor frame rates, it also lowers power consumption, noise, and heat.

On the other hand, as the frames per second (fps) are limited, so does the overall performance of the video card, significantly when frame rates drop below the monitor’s refresh rate. Additionally, the input lag or mouse lag is expected to occur due to the sudden decrease of fps.

Similar to all the software applications, tools, and features that make the user experience better, there are essential advantages and a few caveats to take note of as well.

One drawback is that V-Sync is only applicable for gaming and professional programs that run in fullscreen mode exclusively. As an example, the borderless fullscreen windows are not included.

Another limitation is that V-Sync should not be applied during benchmark tests because frame rates increase would peak and stop when the fps attains the monitor’s refresh rate, hindering the GPU from reaching its maximum capacity in terms of frame rate performance.

V-Sync is commonly utilized for modern video game titles and professional computer-aided design software. Both of which are greatly benefited by the full-screen frame rates that are perfectly timed by the GPU and monitor to prevent on-screen tears and stutters.

However, V-Sync also causes latency or input lags, which are usually observed and described by users as mouse lags. This caveat happens due to the frame display update that only proceeds upon the complete transmission of an image or scene.

No one likes watching videos that have frame rate stuttering and screen tearing. If you are looking to enjoy a smooth and uninterrupted gaming experience, the state-of-the-art Adaptive V-Sync is NVIDIA’s answer to your screen display troubles.

NVIDIA Adaptive V-Sync offers dynamic frame rates stabilization, which means that this feature only activates when it is needed. At increasing frame rates, V-Sync is enabled to limit the fps in order to avoid tearing. During frame rate drops, V-Sync is disabled to control stuttering.

Adaptive V-Sync-enabled devices are just what you need to keep your gaming running smoothly. Never worry about choppy gameplay or sudden changes in the picture again. Make sure that your computer can handle this awesome new upgrade in this section.

If you're aiming to check out this technology’s performance, then read on. We've collected here the list of Adaptive V-Sync supported devices:

While Adaptive V-Sync resolves screen tearing and stuttering at the same time, it has a minor drawback. Gamers and professionals report that an increase in input lag or mouse lag occurrences is observed, so NVIDIA has come up with Fast Sync to rectify that problem.

Temporary image data storage such as front and back buffer are used in Adaptive V-Sync to deliver the required fps on-screen. However, in applying this method, fast-paced programs experience bottlenecks. To solve this, a step called the last rendered buffer is included. 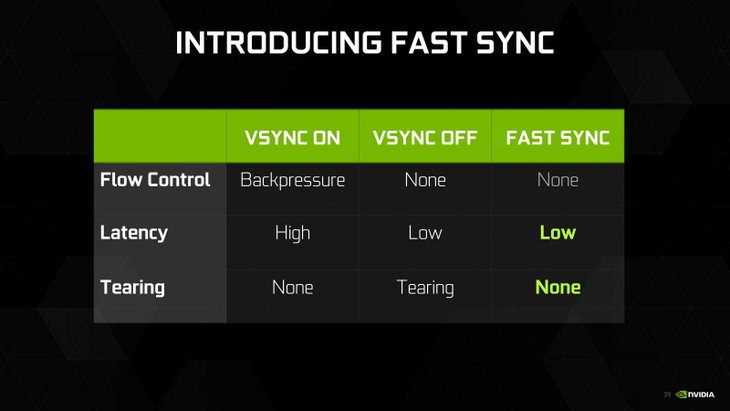 Double buffering presents video outputs of frame rates sequentially, wherein the latest rendered frame has to be displayed first before the next frame is processed. This buffering method is best for achieving frame rate consistency.

On the other hand, triple buffering which is also known as the older method of DirectX, overwrites the earliest renders and skips frames that are not processed in time for its display. The rendering occurs in the background simultaneously troubleshooting the latency problems.

Stay ahead of the game with the most recent line of Fast Sync Enabled graphics cards. These Fast Sync compatible video cards listed below are designed to handle any tasks you throw at them with ease and accuracy.

NVIDIA G-Sync is the leading-edge display innovation that eliminates screen stutters, tearing, and input lag. Removing both the display input lag and tearing simultaneously is what makes this feature exceptional from the rest of its V-Sync predecessors.

The unique component attribute enables excellent visuals with photorealistic images and scenes for the complete immersive experience only NVIDIA’s G-Sync can offer. As a result, video playbacks become smoother, sharper, and more accurate than ever before. 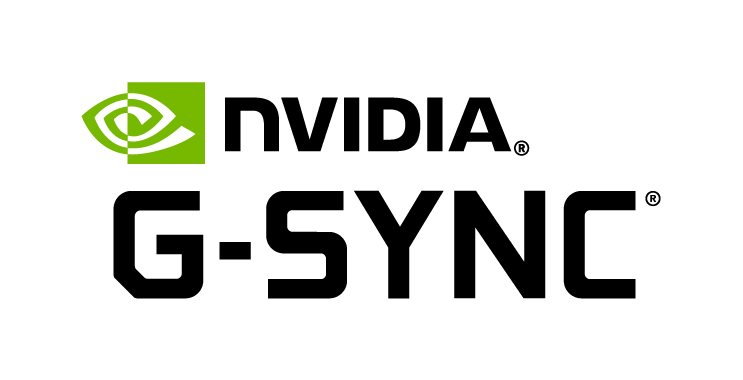 G-Sync-enabled devices are the clear choice if you're after buttery smooth framerates. Upgrade from your current computer display build to a G-Sync capable monitor and video cards, and experience a whole new level of gaming on one of these high-quality cards today!

If you are interested in trying the G-Sync On feature on GPUs and display monitors, take note of these compatible devices:

In January 2021, NVIDIA has launched G-Sync Ultimate that boasts lifelike high dynamic range (HDR) OLED capability that utilizes up to 600 to 700 nits of computer display brightness.

The best attribute of this tool is the refresh rate overclocking. Because the module has its own processor, the display monitor’s refresh rates can run at par with the video card’s frame rates.

The G-Sync Ultimate feature will allow you to max out all the visual settings of your games and work in perfect harmony with the latest high-definition displays. To serve as a guide, we have garnered the devices that can work with this amazing software tool.

Here, we’ll delve into some frequently asked questions about this new technology and outline its benefits & drawbacks before enabling V-Sync on their compatible devices.

Is it better to have V-Sync on or off?

The decision of whether to switch the V-Sync on or off depends on the purpose of the user.

V-Sync can be a great tool to avoid screen tearing and stuttering. It also significantly limits the power consumption, heat, and sound.

However, if the program you are running doesn’t have any display issues, it is best to keep the V-sync off as it could worsen the frame rates and cause severe lags.

What does V-Sync actually do?

V-Sync is short for vertical synchronization. It is a software mechanism that keeps the graphics card frame rate in sync with the display monitor refresh rate, which results in uninterrupted and smoother video playbacks and rendering of graphics-intensive 3D games.

NVIDIA Adaptive V-Sync is the first of its kind in providing dynamic frame rates stabilization, which means that this tool is only implemented whenever required.

At elevated frame rates, V-Sync lowers the fps to prevent screen tearing. When the frame rates fall, V-Sync is switched off to limit the possibility of display stuttering.

Yes, it lowers fps at some point.

If the video card’s fps is greater than your monitor’s refresh rate, V-Sync has to control the frame rates in order to keep it synchronized, avoiding screen tearing in the process.

While it is beneficial for hindering video output troubles, the performance might also be weakened along with this on-screen improvement mechanism.

Is V-Sync bad for GPU?

No, V-Sync will not in any way affect the graphics card negatively.

Although activating the V-Sync fixes on-screen display problems such as stuttering and tearing, forcing the frame rates to drop may dramatically decrease a GPU’s performance.

It won’t ruin your video card, but you may not like the quality of the display upon switching the V-Sync on, so it really depends on your intended use and purpose.

Does V-Sync use CPU or GPU?

The V-Sync mechanism utilizes the graphics card; that’s why the component must also have the capacity to handle this feature.

V-Sync is an application tool that controls the ultra-sensitive GPU clock, deciding and indicating when is the right time to shoot the subsequent frames to be presented on a computer monitor or screen.

Does V-Sync cause performance issues?

Yes, V-Sync causes low performance, but it only happens when V-Sync is turned on.

As mentioned in the previous answers to the questions, it depends on optimizing this application tool.

While V-Sync has a lot of improvements to offer in terms of display quality. It is reported to temporarily weaken the overall performance as the V-Sync tool is mainly used to limit and smoothen the frame rates produced by the graphics card and the computer monitor.

Is V-Sync suitable for low-end PC?

It depends on the gaming or professional software you are working with.

For instance, if a program operates at a higher fps than a low-end monitor’s refresh rate, then V-Sync is the perfect solution to use both of these components together.

If you look at its opposite situation wherein the software runs at a lower fps compared to a low-end monitor’s refresh rate, then the V-Sync system may not be required for use.

If you're experiencing screen tearing or stuttering in some games, V-Sync is the solution you’re looking for. Most people are unfamiliar with this feature, but it's been around for years and is an essential solution to these issues that can arise when playing any game on a PC.

As NVIDIA continues to innovate their technology, they offer G-Sync Ultimate as the latest upgrade of V-Sync which provides gamers with a smoother gameplay experience without compromising refresh rates at resolutions up to 4K in HDR.

To find out more about NVIDIA RTX 30 series, visit our best GPU reviews!


Home » Graphics Cards » What is V-Sync: The Pioneer in Dynamic Frame Rates Stabilization