Video games are one of the greatest new pastimes in the world. Breaking the barriers of the imagination and requiring skill that no other form of media requires, gaming is probably one of the most immersive experiences in mankind, and one that transcends cultural and language restrictions.

At the forefront of this amazing form of media is the world of PC Gaming. For years, PC gaming has offered gamers with the richest and most vibrant worlds, with better and more powerful capabilities than their console counterparts. And recently, a new wave has been going through the PC world, namely in the area of graphics cards.

Compact, Ultra 1080p Gaming, What Else Can You Want? 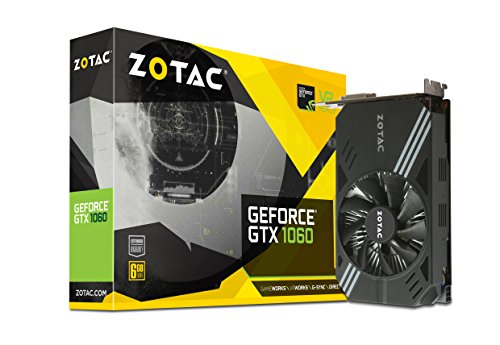 By now, most PC gamers are aware of the newest Nvidia graphics cards with the GTX 1060. These graphics cards have swept the PC world by storm, being a powerful and affordable graphics card, and are sold out in many places online.

The reason for this popularity is well merited. The GTX 1060 graphics cards by Nvidia are amazing powerhouses of gaming, bringing to life vibrant HD gameplay and virtual reality in a way that has been seldom seen before. These cards are also capable of delivering superb framerate and speed, achieving high benchmarks easily with most games available today.
With so much power right at your fingertips and in a convenient little package, it’s no wonder that these graphics cards are in such high demand. But, as is the case with most Nvidia graphics cards, there is such a wide variety of GTX 1060 cards available that it can be hard to find which model is the best.

Today, we will be taking a look at one of these many models with the ZOTAC GTX 1060 Mini. One of a few different models of the GTX 1060 available from ZOTAC, the Mini provides all of the great, high-quality gaming benefits and VR capability that you want from the Nvidia GTX 1060, but delivers it in a small, space saving package.

The ZOTAC GTX 1060 Mini comes with many of the great features you are looking for not just in a GTX 1060 graphics card, but any graphics card in general. Easily better than older Nvidia graphics card models, the ZOTAC mini has more memory, better refresh rate, overclock speeds, and many other features that put it ahead of the pack.

Not all is sunshine and roses when it comes to the ZOTAC mini, however. Noise issues seem to haunt this graphics card, as well as some technical issues that can be more than minor inconveniences. And there is also the ever-present price gougers lurking in the shadows.

To give you a better understanding of what the good and bad are for this graphics card, let’s learn a little more about what’s great about this card and what isn’t.

As said above, the ZOTAC GTX 1060 Mini is capable of running almost any modern game you can think of. Witcher 3, Doom 2016, and many others run beautifully off of this graphics card, with not so much as a single dip in framerate to be seen, always running at a consistent 60 fps.

But let’s say you want to push your graphics card even further. How well does the when overclocked into ultra settings?

Well, to answer with one word: Amazing. When pushed to its absolute limits, the ZOTAC Mini performs admirably. When playing a game like the super popular Overwatch, the ZOTAC can be pushed up to the 115fps mark, all while maintaining the same 1080p quality and never dipping below 85fps.

This is helped out by the ZOTAC mini’s boost clock. Having a base clock of 1506 MHz and being advertised with a boost of 1708 MHz the clock can also be boosted, and maintained successfully, at 1936 MHz, which is insanely fast for a low-end graphics card.

While on the topic of the Benchmarks, outside of what has been mentioned above, the ZOTAC Mini is capable of other significant numbers. During gaming at ultra settings with 1080p and 8x anti-aliasing, the ZOTAC Mini rarely breaks 65 degrees while gaming and the fans only go up to 45%. This is great temperature and function for a card capable of such high-end gaming.

If Virtual Reality gaming is something you have been dying to get in to, seeing as it is at the height of its popularity at the moment, the ZOTAC Mini can provide you with quality that few others can. Boasting reduced latency and enhanced features such as audio, video, and haptics, the ZOTAC Mini strives to give gamers the most realistic Virtual Reality experience that they have ever had in their lives.

And what else is amazing about this is the Mini does these things while maintaining relatively low energy consumption. While needing at least a 400-watt power supply, the ZOTAC Mini generally runs at a modest 140 watts of power. This is awesome for those that need to save on the energy while gaming.

If space is an issue with all the other components in your custom build, then you won’t have much to worry about here. The ZOTAC GeForce GTX 1060 Mini has dimensions of only 4×6 inches, making the Mini live up to its name and take up a minimal amount of space within your gaming computer.

What Could Be Better About The Zotac GTX 1060 Mini?

As is the case in both gaming and life, nothing is ever perfect. As such, there are a few drawbacks that come with the ZOTAC Mini.

To start, while the ZOTAC mini is in operation, the Mini can sometimes emit a “Coil Whine”, or electrical noise, that can become quite loud. It doesn’t seem to happen all the time and it isn’t really known what the cause is or what settings make the noise happen, but when it does it can be quite loud, which may be an issue and distraction to some.

The memory also comes into question a bit. While by no means does the ZOTAC Mini have any issues with its RAM, the unit does come with 6GB as opposed to 8GB which some other GTX 1060 of similar price have. This is by no means that big of an issue, as the Mini runs just fine off of 6GB, but some users may think it is an issue.

What is an issue that causes problems, however, is that there have been isolated cases of some of the ZOTAC Mini’s being defective. While not affecting every unit by any means, some consumers have received defective units that needed to be replaced, with one case in particular stating that it messed up their whole gaming computer. While it isn’t known if that last case was just something that happened to one person or not, it should make buyers take a bit of caution.

Another thing that should make buyers take caution is the hiked up prices showing up on some websites, not just for the ZOTAC Mini, but any of the Nvidia GTX 1060 models. Due to the limited supply at the moment, many sellers have been trying to sell GTX 1060 cards at ridiculously jacked up prices. While this will likely pass with time, if you are buying this card now, under no circumstances should you have to pay more than $270 dollars.

Overall, the ZOTAC GTX 1060 Mini is one awesome and powerful graphics card that any gamer should be glad to have. Beautiful HD gaming, realistic Virtual Reality worlds, and much more will make this buy more than worth the money spent.

And with that, we conclude our review of the ZOTAC GTX 1060 Mini. Now more than any time before, it is an exciting time to be a gamer. With online and high definition gaming, as well as Virtual Reality, gaming worlds are becoming more alive and realistic than ever before. And with the ZOTAC GTX 1060 Mini, gamers are taking their next big step into the future.