With their new Radeon VII graphics cards, AMD introduces the world to the best lifelike VR experience yet. This card features 16 GB high-speed HBM2 memory and can handle even the most demanding games and applications today, which definitely attracts extreme gamers.

In this review, we will look at what makes Radeon VII exceptional and how it can improve your virtual reality explorations. Plus, find out how it performs for content creators, artists, and professionals. Will it live up to the hype? Stay tuned for more! 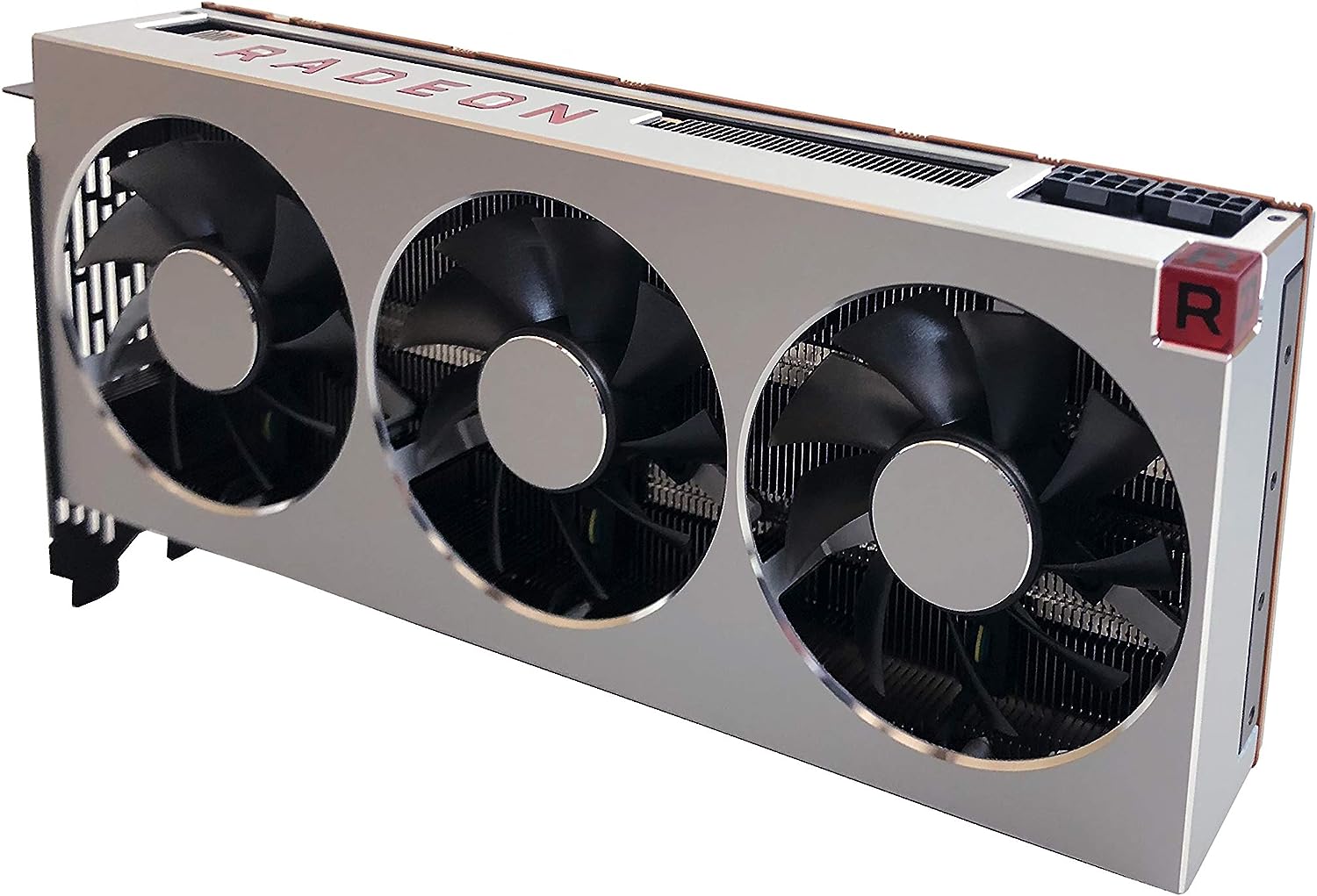 Powered by 7nm technology, this card delivers base and boost frequencies of 1400 MHz and 1750 MHz, respectively.

This card is capable of delivering stunning 4K60 HDR gaming experiences. It features 16 GB of ultra-fast HBM2 memory and 1024 GB/s bandwidth, providing you with the best graphics experience possible!

In addition, it comes equipped with one DisplayPort 1.4 HDR and two HDMI ports for maximum flexibility.

So if you're curious about AMD's new flagship graphics card, then keep reading!

A video card that’s perfect for all your memory-heavy workloads, the Radeon VII has plenty of VRAM storage to tackle the visuals that you need for both creative tasks and play. With this GPU, you don’t have to compromise quality for your multimedia requirements.

Future-proof your computer rig with AMD’s Radeon VII. The amazing graphics card is engineered to beat its competition at 1440p, and it is a decent gateway for users who want to jump into 4K resolution.

If you're looking for a top-of-the-line video card that will give you the finest gameplay, look no further than the AMD Radeon VII. This card is covered with an aluminum backplate for strength and passive cooling. Also, it has etchings on the underside for a touch of style.

The Radeon VII GPU guarantees stable streaming of online games without any latency, screen tearing, and stuttering. This card delivers smooth frames and superb video playback so you can enjoy your favorite titles without any interruptions.

Dubbed as the world’s first 7nm gaming GPU, the AMD Radeon VII is packed with groundbreaking discoveries that can power through the most challenging titles out there!

The AMD’s state-of-the-art innovations included in this magnificent PC component are:

AMD Radeon VII opens up a new world of immersive gaming and entertainment experiences. With the advanced Radeon VR Ready Premium, this powerful graphics card allows you to delve into VRs that look so crisp you'll feel like you're actually there.

This AMD video card gives you the ability to game in true HDR and achieves a whole new level of gaming realism. Additionally, it presents progressive applications like FreeSync that help prevent stuttering and tearing for the smoothest gameplay possible.

The Radeon VII’s DirectX 12 will keep you at the forefront of the action. This built-in software permits activation of the CPU’s multiple cores that optimize the rendering, shading, and lighting simulation activities that can be transmitted to the GPU.

Step up your gameplay with Eyefinity! This technology allows you to simultaneously utilize several monitors and other displays with ultra-fast and superior results. This program renders a mesmerizing and out-of-this-world VR immersion that will provide an extraordinary gaming experience.

Elevate your gaming to new heights with VSR. Mainly designed for low-resolution monitors and screens, it enables improvement in picture quality. If you decide to apply this attribute, overall gaming performance may be affected because of the tendency of frame rates to dip.

All AMD Radeon GPUs are Vulkan-compatible—meaning high-quality images, 3D models, and scenes can be processed across various chassis form factors and Operating Systems (OS) such as Linux, Windows 7, Windows 8.1, and Windows 10.

According to recent customers and online reviews, the Radeon VII was observed by most users to be a remarkable GPU, especially for cryptocurrency mining.

The Radeon VII works best for 1440p resolution displays, which is at par with the NVIDIA GTX 1080 Ti. However, it can also render a 25% better performance for 4K gaming and creative software than the RX Vega 64.

AMD claims that the Radeon VII can do software-based ray tracing but only up to an extent.

Without NVIDIA’s acceleration hardware, RT and Tensor cores, including the AI-led DLSS,  simulating the photorealistic shading, global illumination, and ray tracing capability would not be possible.

While this promising card does not have the sought-after DLSS and ray tracing, which is only found in NVIDIA cards, AMD has equipped the GPU with massive memory capacity and viable frame rates for noteworthy performance.

Why is Radeon VII so expensive?

Unlike the other AMD cards, the MSRP of Radeon VII costs as much as NVIDIA’s RTX 2080.

Although Radeon VIII is priced higher than expected, it has some notable advantages. First of all, the Radeon VII has twice as much memory capacity as an RTX 2080. These graphics cards mentioned above have 16 GB and 8 GB memory sizes, respectively.

In addition, the Radeon VII is positively reviewed as GPU that performs at par with the Pascal high-end NVIDIA GTX 1080 Ti and the RDNA enthusiast-level AMD RX 5700 XT.

Is Radeon VII worth it?

The Radeon VII is a good buy for creative professionals and enthusiasts. It is engineered specifically for extreme gamers.

Even though the Radeon VII can be considered as good as an NVIDIA RTX 2080, this graphics card might not be as impressive as an RTX card without the DLSS AI learning and full-range ray tracing features.

If you are a crypto miner, then the Radeon VII is one of the most suitable GPUs for you right now. It is known for its incredible capacity to crunch a myriad of operations at any given time, a real computing engine.

I love this GPU

I love this GPU. It outperforms every one I have owned in the past. I recently upgraded from my RTX2070 and the difference is significant. I am happy that I finally tried out an AMD, I am certainly happy with the results.

This card performance is unbelievable

I am a mechanical engineer working on complex, heavy, and large assemblies 3D CAD and game engine environments.

Do not let the old Radeon VII performance deceive you. This card performance is unbelievable. The power requirement vs the performance output places this card above any NVIDIA Quadro card.

I have even gamed on this card with titles like the new Call of Duty Black Ops: Cold War with most graphics settings in ultra, and this GPU keeps 65 FPS.

My system is an AMD Threadripper 3970x with 64g RAM. You might need a good system to suck up all the juice from this GPU. I am very happy with this investment.

The card never runs above 40°

I really haven't even stressed this card. I am currently running two 4K X32 inch monitors and one 4K X 72 inch smart TV. The card never runs above 40 degrees C and never utilizes more than 14 percent of its Processing power. I have no doubt it will perform flawlessly rendering video when I do get around to editing some of my files.

AMD’s Radeon VII is an excellent choice for VR enthusiasts or content creators looking to take their work into a new dimension. With its 16 GB high-speed HBM2 memory, it lives up to all the hype and can process even the most graphics-intensive titles today.

Stay tuned as we explore why the latest AMD video card lineup is so special and how it can improve your VR adventures. If you enjoyed this in-depth look at AMD Radeon VII, be sure to check out our reviews of other cards from AMD!